Christmas is almost here, and that means that I’m working overdrive to make and get presents for all my friends and family.

Christmas is almost here, and that means that I’m working overdrive to make and get presents for all my friends and family. That’s one of the great things about having a job and being able to pay for things without having to ask a parent or the person that I am shopping for to give me money or help me buy said items.

One of the projects that I’ve been working on is for my mom, and it’s really just a project that I had done back in 2013 – which she requested that I frame it for the spare room that she has in her house. So lo and behold I dig it out from the depths of my portfolio bag and put it on my easel to see exactly what I have to work with. By God I had a lot to work on.

Now before you ask what it is (and I promise I will show you) I’d like to give some background information on what the project is and what mediums I used originally. Back in 2013 I was a senior in high school, which means that I was able to take one of four Advanced Placement (AP) classes offered. Me being my own peppy person and having taken all other art classes that the school had to offer, I took the AP art class (which in itself required that you take all other art classes in general).

When I first started this project the only medium that AP Art students had to work with was acrylic paint. To be honest I had a love hate relationship with the medium in general for a couple of reasons in particular. First, it dried really fast which was a pro and a con, especially when I had to work very fast in order for something to look the way I wanted, the con being that the speed at which I was working made me not think about how everything looked as a whole. Second it was very shiny when dry, which made it hard to see what was going on when it was dry. Third (which is a problem with all paint in general) you can only make so much of a certain color and when it’s gone, it’s very hard to re create the art.

Now this was a breadth piece, which meant it could be of anything I wanted, and I had a lot of reference photos to work with. One of which was a battleship that I had taken a photo of during the summer. Long story short this was one of my favorite and best pieces that I had done during that year. The most important part of it is that my mom LOVED it.

Below is the image that I have been working on for the past week and a half. Really it’s the first real project that I’ve worked on with OIL PAINTS. Which in my opinion is much easier to work with. You’ll see how the places that I’ve worked on have a little bit more… depth to them? Before it was rather dull and flat, and the worst part is that the lighting was off! You’ll see the finished product before Christmas, don’t worry! But for now, I gotta sign off. 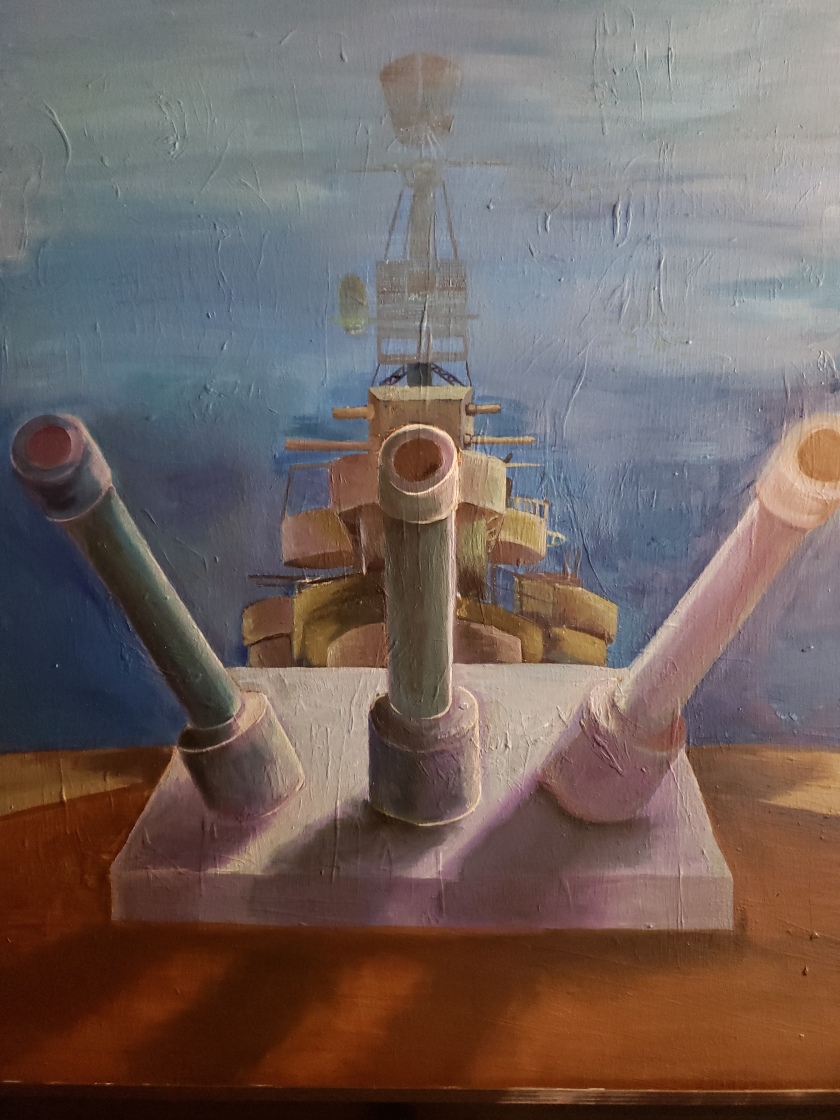 Hello all! I hope you enjoyed the post! There's a lot more where that came from too. I update every day (or at least try to). If you have any questions, feel free to post a comment or send me a message. I'm always up for new ideas! View all posts by The Average Owl-Cat

How Many Posts this month?